A while back I wrote about my adventures in dog-sitting. In that post, I mentioned how I had never had a dog, and how, once-upon-a-time, big dogs even scared me a little. It now looks like I have signed myself up for a life-long version of immersion therapy.

This is a false representation. She is rarely, if ever, this still.

Her full name is Mrs. Dog Dobalina, in homage to The Monkees’ song, “Zilch” (although my fiancé chooses to reference “Mistadobalina” by Del Tha Funkee Homosapian, which is clearly a homage to the ORIGINAL “Zilch” song- but whatever.) She is a Belgian Malinios, a breed very similar to the German Shepherd, but slightly is smaller in her final form. At this point she is 18wks and the heavy side of 30lbs. I have nicknamed her “Tank”, as her best descriptor would be “incredibly solid and oblivious to objects around her”. This includes people, furniture, cabinetry, walls, doors, the cats- pretty much anything in general. She bounces and shakes off the impact like it was nothing. Luckily walls do not bruise, and the cats are pretty good at holding their own. 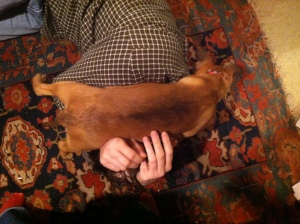 He didn’t stand a chance against “The Tank”.

Things that I have learned about having a puppy so far:

The whole “training” thing has been an interesting process, as my cats more trained me than the other way around. First, I’ve had to butcher learn commands in a completely different language, as you wouldn’t want some stranger to be able to tell your dog to “roll-over” at the drop of a hat, would you? (Of course not. Those are family tricks!) Second, I’ve been trying to learn how to be the “alpha-dog” to her. I now have more empathy for parents with toddlers who are learning to push their boundaries. “If you didn’t see me do it, then you don’t KNOW that I did it, right?” (Cue the puppy-dog eyes, which, by the way, STILL do not work on me, so tough luck there, Lina.)

No matter how many versions she tries, I refuse to melt (usually).

I know that she has learned (and grown!) so much in the 6 weeks that we have had her, so I have to remind myself that despite of all her progress she is still a very energetic and distracted puppy. One whose first reaction is to give puppy kisses, and want you to play tug-of-war and get belly rubs, and contort herself in funny ways when she outruns the ball.

There are occasions where I question if she actually has all her bones.

As long as she understands that I will always take the cat’s side, then I think we will get along OK.