The morning of my first full day in Japan broke in a colorful display of spring. My room faced a neighbor’s vegetable garden, and I cannot think of anything nicer to wake up to than a whole bunch of growing things. 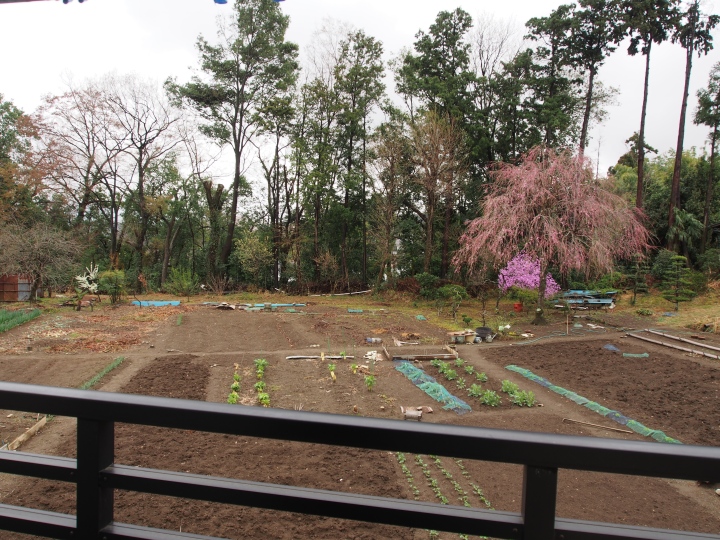 Now, admittedly, “morning” is a relative term here, as I was still adjusting to the time difference. By the time movement towards the outdoors was achieved, it was lunchtime. Lunchtime, of course, being another opportunity to eat tasty, tasty things!

Now the sushi spot that Nathan had frequented for much of his time in Japan (“Within walking distance” has many advantages) had gone the way that it appears many things do there when change is imminent: Disappears, with no warning, in the middle of the night. Because of this a substitute sushi joint had to be located… and my first battle with Japanese Automatic Doors ensued.

Except the one I confronted did not have handy-dandy English

This is the height of Japanese Door technology- because not only is it a door, it is also social entertainment in a schadenfreude way. On this day it was I who provided the entertainment. As a Southern Boy, my cousin stepped back to let me go though the door first, which would have been fine if it had been in the States. But this was not the States, and this particular door did not include the English as displayed in the above picture.

So I stood there, trying to figure out how the heck I’m supposed to work this door, until a nice gentleman inside took pity on this poor American, and opened the door for me. I like to imagine that Nathan had undergone a similar experience, and was therefore helping me fully transition into the Japanese world around me, but really I think he just wanted a good chuckle.

After the customary game of charades with the staff, we found ourselves seated in a booth of the most magical land of the world: The land of conveyer belt sushi.

I figured how to work the Sushi Spaceships much quicker than I did the “automatic” door.

Now, I have been to some of the conveyer belt places back home, but I’ve found nothing on par with what they have in Japan. First off, each plate was only ¥100, which is roughly $0.98 US Dollars. Second, everything just tasted much fresher. 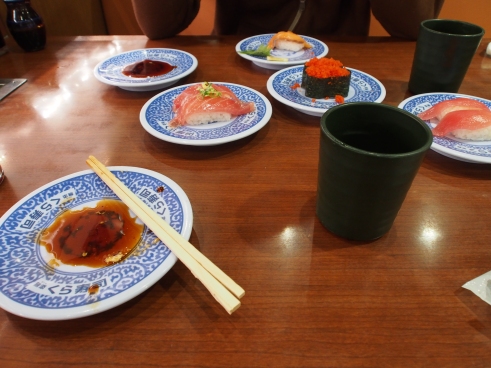 Intermission before grabbing more of ALL OF THE FÜDS!

Third on my list- See that little slot at the end of the table? You put your used plates down there and it uses that to total your bill, but it is also A GAME. Every few plates, a little game animation pops up on your table’s touch screen indicating that you MIGHT win something! (Ok, admittedly, I did not actually witness anyone win anything while I was there, but I was still entertained.) And fourthly (yes, FOURTHLY) above the rotating sushi-goodness is an express conveyer belt. EXPRESS FOOD TO YOUR BOOTH! Every so often, a plate of sushi would zip past, or a covered bowl of soup would zoom overhead. And the only human interaction to speak of was with the staff up front, when you received your booth number and when you went to pay afterwards.

After a successful stuffing of the gullet with raw fish, we proceeded to Yokota Air Base in Fussa. There are two things of particular note for this base:

Dead-Center, you can see a ferris wheel. No lie.

2- They have some spectacular sakura blossoms in the spring 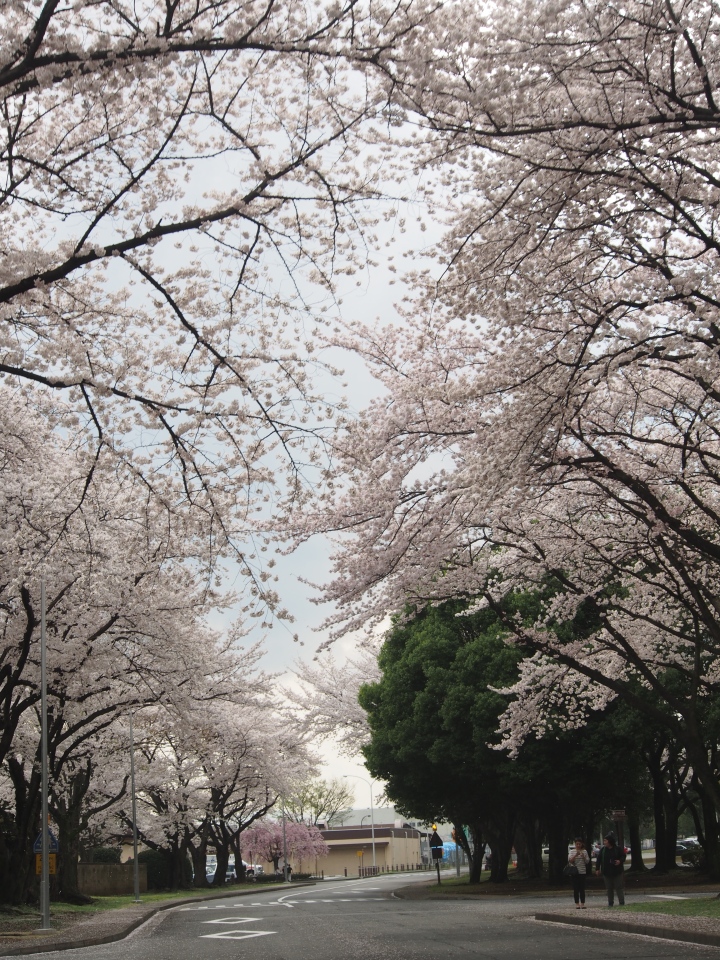 You want to look at me ALL DAY LONG! 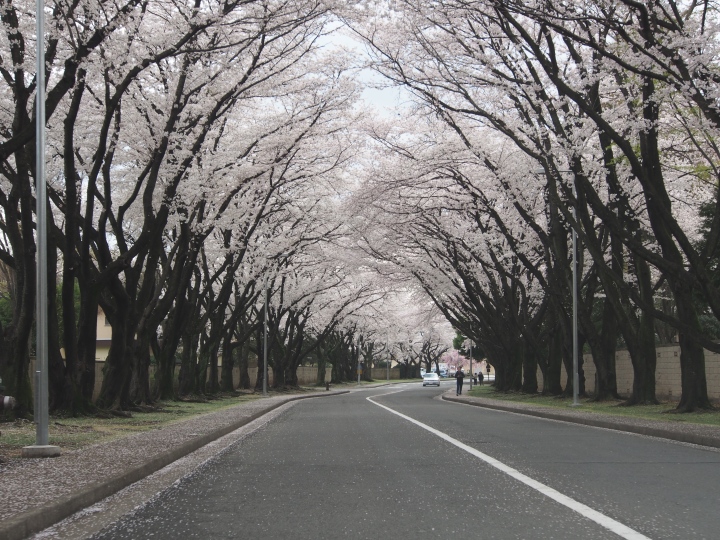 Come! Stroll along my flowery path! 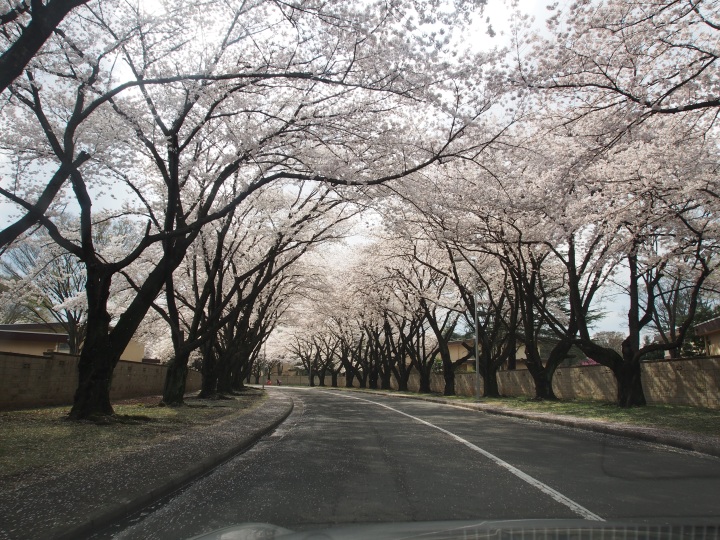 Time has frozen, and you are OK with this fact.

By this time Nathan thought I had had enough Zen, and that I was ready to experience the local rail transit, Japan Railways East, so we headed on to Fussa Station.

No, Really… it TOTALLY made sense. Eventually. At some point.

I can only let you imagine the looks that two rather tall Caucasian redheads got as they boarded the train to Tachikawa.

Tachikawa appeared to be a small downtown, with many tall buildings, designed to sell things to tourists and locals alike.

Oh the things you can buy!

I didn’t actually notice the KFC when I took this.

Although they had some rather interesting methods to do so.

After a long first day of exploring a new land, we headed back to home. Unfortunately we were too exhausted to check out the local evening events, but it had a definite dream-like feel in the warm spring air. 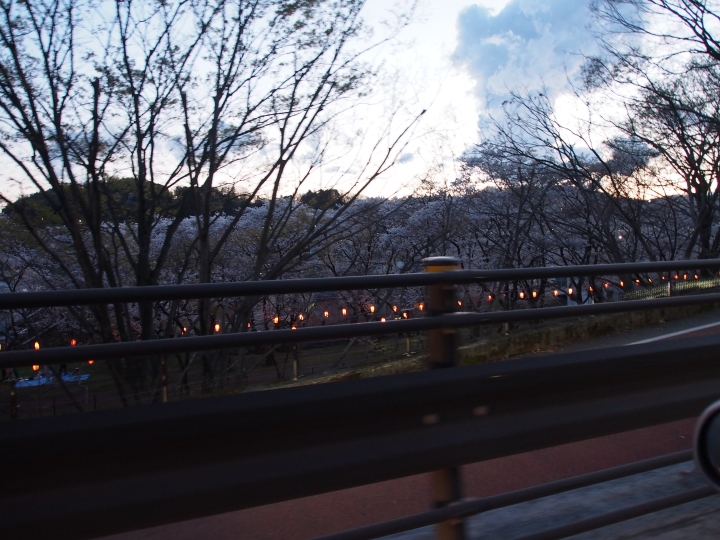